Take your Hawaiian shirt, unbutton it and enjoy Miami... Surf and turf style

Tour ID P12A0M Tour Dauer 5
Banana Joe would particularly like to recommend this city tour to you. Hawaiian shirt and straw hat are the perfect accessories for our tropical adventure! So let us show you the most exotic corners of Miami's and get to know the city through the eyes of an insider.At Banana Joe Tours, we see Miami more as a “gateway” to the tropical, urban south-east of Florida, where we would like to whisk you away.Where is what? Who is where? Where do i want to go And where do I not want to go?From Homestead to West Palm Beach, a huge metropolis has grown together over the last 120 years and is home to over 7 million people from all regions of the world. From the Russian Sunny Island to the largest German enclave in the USA, Fort Lauderdale, everything is included.Miami is more than a place where only immigrant Cubans live and shape the cityscape. Rather, stereotypical places like Little Havana are only tourist centers where tourists are relieved of their money.Whether Trump Tower, Porsche Design Tower, Estates at Aqualina or Armani Residences, almost all of the new top vaulted scrapers are in Little Moscow.Yes, exactly, Russian is spoken in this part of Miami and it is an architectural highlight.This is also where the Kitchen 305 restaurant is located, with an “all you can eat” lobster offer in a class of its own.Only at Banana Joe Tours can you find out what's really hot in South Florida.Get great tips on how to save in Florida. If you listen carefully, you can get the money for the city tour out in no time!Wynwood was so dangerous 10 years ago that parents couldn't take their children to school there. Now, based on the New York model SOHO, it will be the new pedestrian-friendly and hip trendy district in Miami.But something like that doesn't happen all by itself, just like in New York, the same investors like Tony Goldmann († 2017) have their hands in the game ...Make a stop with us in Wynwood and experience the changing times live with us.Weather, infrastructure, taxes, jobs, etc. have made South Florida one of the most prosperous places in the United States. Nowadays, Miami's skyline is the third largest in the United States and should replace Chicago as the second largest skyline in about 15 years.Did you know that all the cities south of Lake Okeechobee were once part of the Everglades, which are now only about 4500 square miles in size?Miami Beach draws connoisseurs and exotic people from all parts of the world under its spell and attracts with palm trees, sunshine and dreamy beaches.Whether Lincoln Road or Espanola Way, Washington or Collins Avenue, Lumus Park or South Beach. We give you information about everything worth knowing.Exclusively at Banana Joe Tours, we take you to a private island in the middle of Miami's financial district.The absolute highlight of the tour, however, is the final speedboat ride.
Along Biscayne Bay, Fisher Island and Dodge Island, the pulsating port of this unique metropolis.
From the speedboat you can take the best snapshots ever ...
Star Island and at full throttle past Ocean Drive, out onto the Atlantic Ocean ...We only say: madness!Nowhere can you capture the true flair of Miami's better than off the coast of Fisher Island with a view over Biscayne Bay to the imposing skyline of Downtown Miami's.
Let us take you to the mystical place that proves that Miami has been inhabited for over 2500 years, even though Julia Tuttle only founded the city 110 years ago.
Find out who the “Golden Eagle” is and what drives it.Discover the millions of villas of Hollywood stars and starlets up close and learn interesting and piquant details about the history of the magnificent residences.We're talking about Will Smith, Ricky Martin, Sylvester Stallone, Gloria & Emilio Estefan and many others ...The spooky Addam's Family home is also on our route. It has been abandoned for 42 years and it is rumored that it is haunted ... Of course we will not miss the opportunity to present you Tony Montana's villa from the Miami epic “Scarface” or what is left of it.Continue to South Pointe Park and its dubious past.Fisher Island: here the elite of this world indulge in a royal lifestyle - let us show you the island on the sunny side of life.This is just the beginning of an exciting and diverse city tour! If you want to take a look behind the scenes of this microcosm, the Miami city tour by Banana Joe is the right place to start. At a budget price!

with at least 10 years of Florida experience

Each review has a personal story. Read and write reviews

Included in your tour

Are you ready for the most unique Miami City Tour that money can buy you? For this unforgettable tropical adventure all you need to bring are your sandals, shorts, hats and a positive attitude!

We will show you Miami’s most exclusive spots, its best kept secrets and everything else you need to see while staying in the ‘Magic City’! 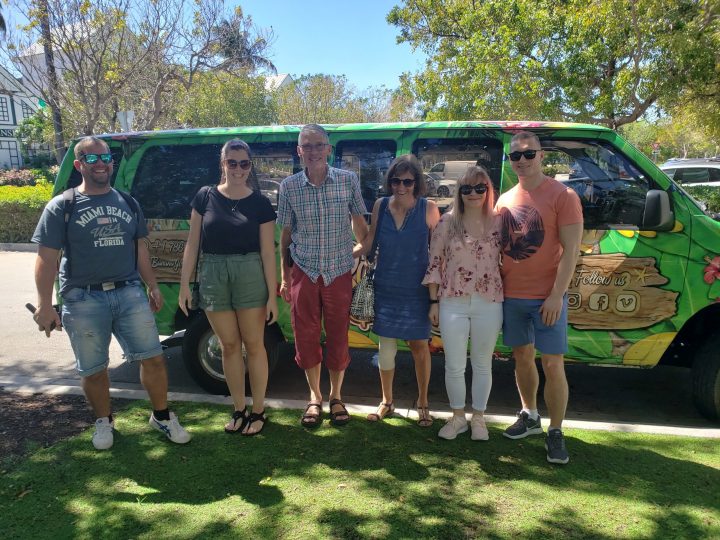 We believe Miami is THE most vibrant, fascinating and exciting metropolis in the US and one of the most interesting cities in the world. With over 300 skyscrapers Miami has the third largest skyline in the US. With tons of background information and personal experiences from years of living here we will take care of you like no other tour company can.

Just kick back and relax and enjoy our ‘no-questions unanswered’ tour.

See and learn about Brickell, one of America’s busiest financial districts and Miami’s historic center. At Banana Joe Tours we take you to ‘Brickell Key’, a private island right in the heart of Miami. On top of that Brickell City Center, a spectacular $1.2B shopping center has been opened recently and attracts plenty of shop-a-holics as well as architecture enthusiasts.

We will show you the mystic place that is prove that the Miami area has been populated for at least 2700 years, even though Julia Tuttle and Henry Flagler founded the city (that has never been a town) not even 125 years ago.  Learn about the Tequesta, their ways of life and the Three Souls that live in each of us.

Miami puts its spell on people from all walks of life and doesn’t just call you with palm trees, sunshine and beautiful beaches. Lincoln Road, Espanola Way, Washington and Collins Avenue, Lummus Park and South Beach all have an exciting story to tell. We move on to South Pointe Park and its infamous past.

Add a boat ride to top off your perfect Miami experience. Cigarette Speedboat top speeds will take you along Biscayne Bay, Fisher Island, Dodge Island and the busiest cruise port in the world – Port of Miami before speeding along Ocean Drive and out into the Atlantic Ocean.

Let us give you useful advice on where to shop, eat, drink and party. We’re going to make sure that you don’t have to fall for one of the many tourists traps that have been promoted for too long and safe you from bitter disappointment.

If you want to look behind the curtain of this bustling microcosm that we call our home, make sure to take this tour right at the beginning of your Miami trip. You will see our city with the eyes of a local after. And all this at a budget price that can’t be beat!

So, what are you waiting for? Book your unforgettable Miami City Tour with Banana Joe Tours and make memories that will last a lifetime!

You’d like to book a VIP city tour from Miami to Fort Lauderdale? You want to upgrade to a yacht?

You’re coming from the cruise port or airport? All our tours are perfectly combinable with our Transfer Service .

To have the full South Florida experience book other tours and explore the Wild South. Book one of our Everglades tours. 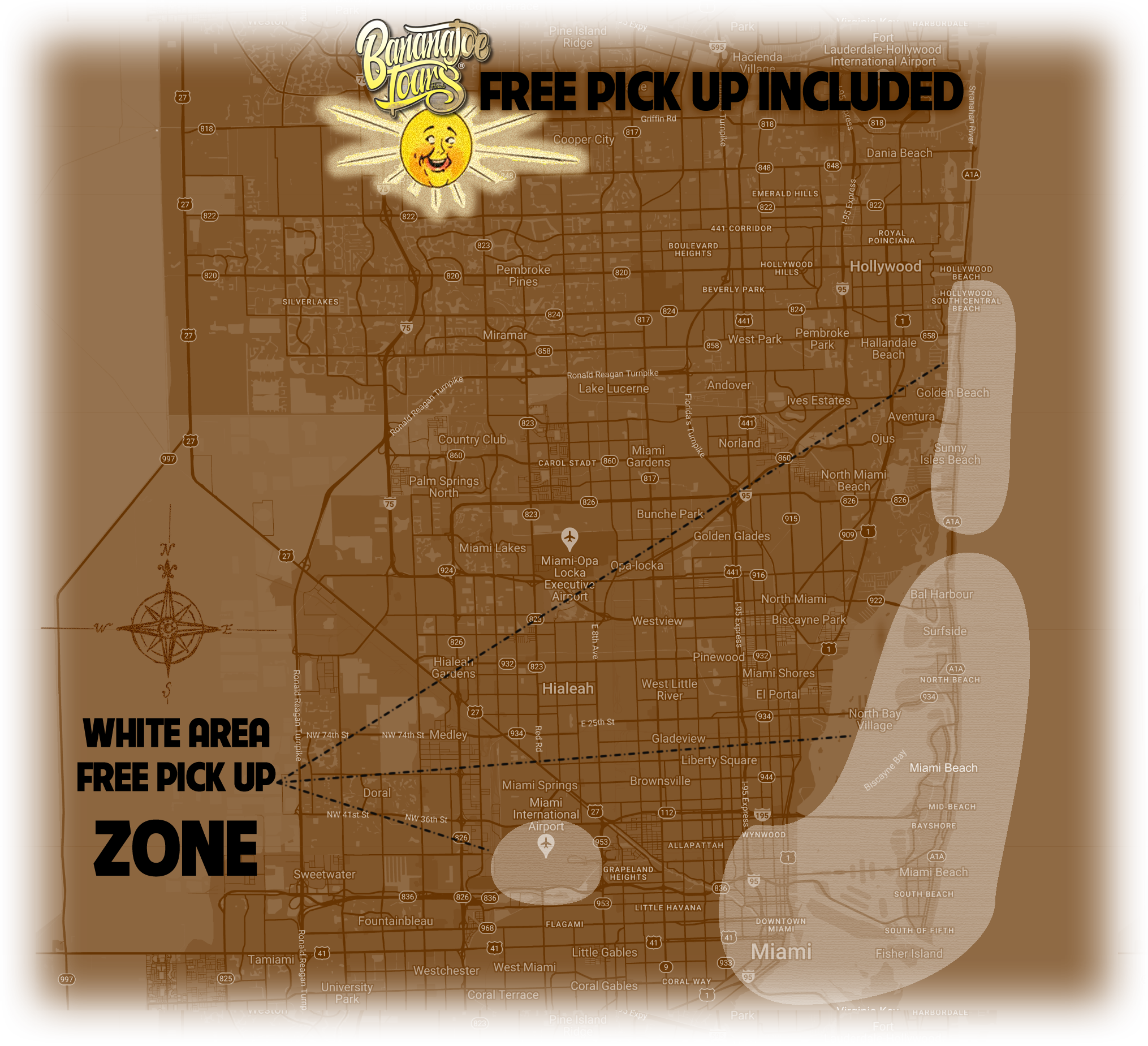